Human knowledge is expanding so fast that the sequence of our discoveries has become disorderly. We have mapped the universe before completing an inventory of life on our own planet.

Scientists have struggled even to estimate the total of our living species. Their best guess lies between 5 million and 30 million. A 2011 study suggested a figure of 8.7 million, acknowledging a considerable margin of error. Only 1.2 million species have actually been identified.

Published by IPBES, the world scientific body responsible for biodiversity policy advice, the 2019 Global Assessment on Biodiversity and Ecosystem Services finds that around 1 million animal and plant species are threatened with extinction, many within decades. Live coral reefs – among the most species-rich habitats on earth – have declined by an average of 4% per decade since 1990.

The IPBES report estimates that human activity is responsible for a rate of species extinction at least tens to hundreds of times higher than the natural background rate. Scientists warn that the accelerating rate of destruction of biodiversity may trigger unpredictable tipping points in our earth support systems.

It is often said that the countries most affected by climate change are those which are least responsible for it and which lack the means to adapt. Exactly the same is true of biodiversity loss. Furthermore, the undignified scramble for raw materials and genetic blueprints occurs largely in the world’s poorest countries, with insufficient reward for local economic development and poverty reduction.

At the same time, limited financial resources available to promote the sustainable use of biodiversity are skewed in favour of richer countries, mirroring the lack of funding for adaptation to climate change. The multiple sense of injustice felt by the less developed countries symbolises the mountain that must be climbed to tackle environmental change in an unequal world.

Often described as the “sixth great extinction”, this anthropogenic slaughter is compared with devastating events of geological history such as the disappearance of the dinosaurs 65 million years ago.

Indeed, the link between unnaturally high rates of species extinction and human activity is only one of the factors prompting moves towards the formal declaration of a new geological epoch to succeed the Holocene. A decision to usher in the “Anthropocene” now seems probable, given the evidence that humanity will leave a permanent mark on the earth’s geological record.

Such a radical scientific verdict on the state of the planet adds to the frustration of environmentalists at the stuttering international policy response. The challenge of decoupling our dominant economic model from its inherent abuse of nature is proving too much for the insular mindset of contemporary global leadership.

The scientific community continues to seek effective ways to explain why haemorrhaging biodiversity will sooner or later disturb other pieces in the jigsaw of planetary boundaries. Environmental campaigns, too, are considered more effective if presented on a broader canvas in which ecosystems are protected, not just for their intrinsic value, but also to secure basic human needs of food, water and energy.

What to expect from the world's sixth mass extinction

11/1/2022: The Anthropocene mass extinction is the only one caused by humans, and climate change, habitat destruction, pollution and industrial agriculture all play a hand. A painful reminder of the potential consequences of biodiversity loss for us and the environment.

Rainforests in 2022: A look at the year ahead 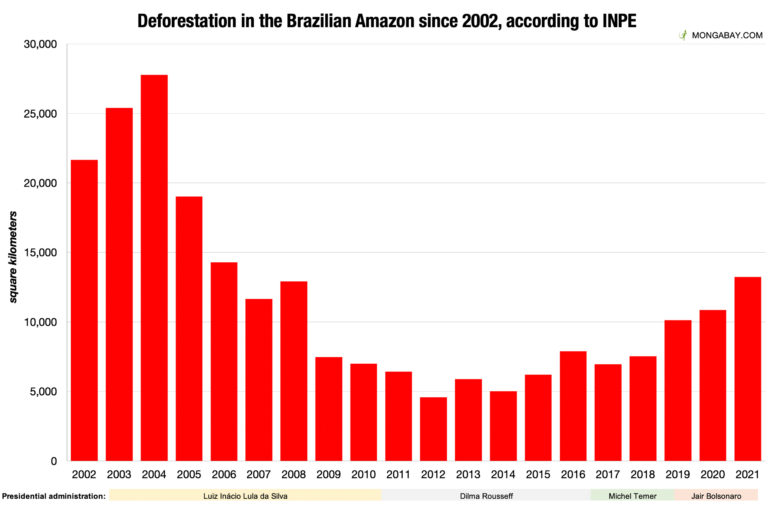 4/1/2022: Mongabay founder Rhett Butler anticipates major storylines for tropical forests in the coming year. These range from the post-COVID recovery to worrying trends in Brazil and Indonesia.

26/11/2021: Fourteen years since the launch of Africa’s Great Green Wall project, only 4% of the land restoration in the Sahel region has been completed. Billions of dollars in new funding announced this year have raised hopes that the initiative to combat desertification will gain momentum. 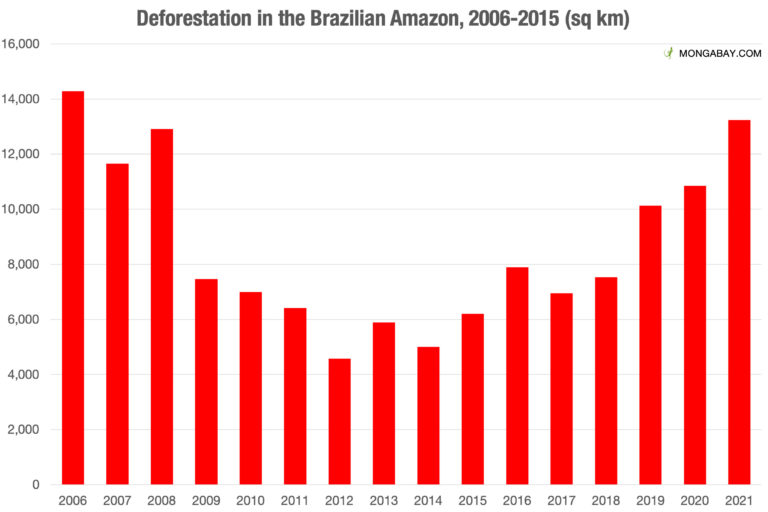 18/11/2021: Deforestation has been on an upward trend in the Brazilian Amazon, which accounts for nearly two-thirds of the entire Amazon rainforest, since 2012. It has accelerated particularly sharply under the presidency of Jair Bolsonaro.

One in five hectares of oil palm in Indonesia is illegal 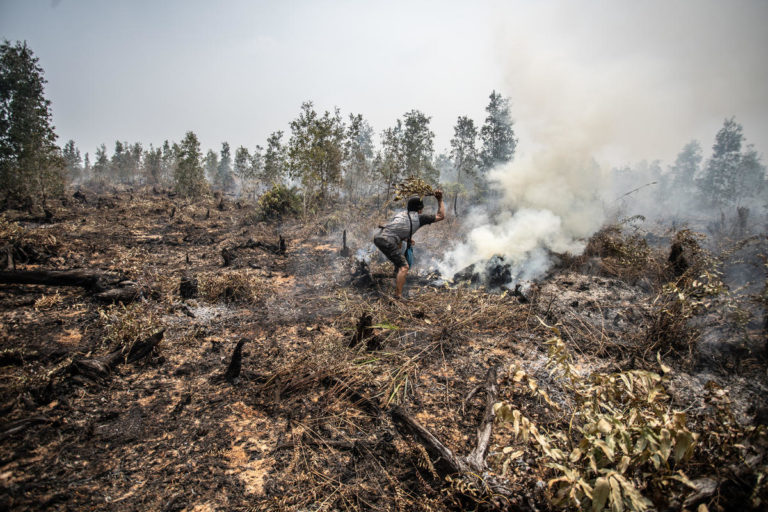 11/11/2021: A Greenpeace report finds that an area of tropical forest the size of Belgium has been replaced by oil palm plantations on land designated by the government as illegal for commercial agriculture. A third of all palm oil companies in Indonesia have illegal operations.

11/11/2021: Nature-based solutions, like forest protection and mangrove restoration, may be included in a UN climate agreement for the first time. While advocates want to link the climate and biodiversity agendas, critics say nature should not be commodified and human rights safeguards are needed.


1/11/2021: Greenpeace has slammed the non-binding status of the Glasgow Leaders' Declaration on Forest and Land Use.  Stronger measures are the only solution to Amazon destruction, the result of deliberate policy choices by the Bolsonaro government in Brazil.

World leaders back deal to end deforestation by 2030 (again)

1/11/2021: More than 100 countries, including Brazil, Indonesia and the Democratic Republic of Congo, have signed up to the Glasgow Leaders' Declaration on Forest and Land Use to stop and reverse deforestation by the end of the decade. A 2014 UN climate meeting in New York issued a similar declaration.

Friends of the Earth calls out "Nature Based Solutions"

27/10/2021: Friends of the Earth International is concerned that big business and governments are able to claim that mass tree planting and other "nature-based solutions" mitigate climate impacts such as industrial agriculture and fossil fuel extraction.

Source: Friends of the Earth International

26/10/2021: The Forest Stewardship Council has come under fire from NGOs for flaws in its certification that fail to prevent deforestation. And companies with questionable human rights records have been awarded certificates.