No topic is more likely to derail international climate negotiations than the provision of adequate financial support for low income countries. The natural justice that the “polluter pays” for the global impacts of climate change comes to roost on the reluctant richest countries.

Quantifying these climate justice finance requirements and the extent to which they are being met is notoriously difficult. The Adaptation Gap Report 2020 published by the UN Environment Programme estimates that current annual adaptation needs in developing countries amount to $70 billion, rising to $140-$300 billion per year by 2030.

For mitigation of emissions, the International Institute for Environment and Development has costed the plans submitted by the 46 Least Developed Countries alone at $58 billion per year from 2020-2030.

The first point of reference for this funding will be the domestic budgets of the developing countries themselves. Although these are likely to be small in relation to the need, there is evidence of leadership, especially in relation to adaptation costs. For example, Bangladesh regularly allocates over 5% of its total public spending to its climate projects.

Nonetheless, low income countries will depend greatly on international climate agreements to bridge their climate financing gap. The financial dimension of climate justice is secured in the UN Framework Convention on Climate Change (UNFCCC) which commits richer countries to contribute to the costs of reducing emissions and adapting to impacts in less fortunate countries.

The Convention has powers to administer funds for this purpose, principally through the Green Climate Fund which became operational in 2015, with a governing board whose membership is evenly divided between developed and developing countries.

A quantified commitment to international climate finance was first articulated in the 2009 Copenhagen Accord. Richer countries agreed to “a goal of mobilizing jointly USD 100 billion dollars a year by 2020 to address the needs of developing countries.” The Paris Climate Agreement extended this commitment to 2025, although the text wording is flimsy and concerns climate justice campaigners.

Progress towards the 2020 commitment is monitored by the Organization for Economic Cooperation and Development (OECD). Its most recent report presents a figure of $78.9 billion for climate justice finance in 2018. The Covid-19 pandemic casts doubt on whether the $100 billion promise will have been achieved by 2020; data for that year may not be available until 2023.

The OECD figure for 2018 reveals that loan finance contributed almost 80% to the total. Development agencies such as Oxfam have questioned whether the inclusion of loans, as opposed to grants, is consistent with the spirit of the UNFCCC obligation. These agencies also express concern that climate finance has skewed significantly towards mitigation, thanks to the potential commercial returns of renewable energy projects.

To place the scale of climate justice finance in context: in 2019 the world’s 50 leading economies provided subsidies totalling $178 billion for the production of fossil fuels, according to the OECD. This is at a time when science indicates that the majority of fossil fuel sources should be left in the ground, if global warming targets are to be met.

Some of the disappointment over climate justice finance can be attributed to the stuttering progress of the Green Climate Fund (GCF). This flagship vehicle should be a magnet for new funds, enabling the UN climate leadership to shape project and funding strategies.

Administered from South Korea, the Fund has struggled with fundraising, administration, investment of its assets and retention of senior staff. Although since reversed by President Biden, the withdrawal of US funding by the Trump administration was disruptive.

Loss and Damage
Unfortunately, there are limits to the scope of adaptation, beyond which the forces of climate change gain the upper hand. The most extreme weather events, capable of overwhelming defences of property and crops, are no longer exceptional.  “Slow onset” events such as rising sea level and desertification can render local economies unviable. Costs of reconstruction and economic recovery of such disasters are described in UN climate negotiations as “loss and damage.”

Unequal scope for effective adaptation and disaster risk reduction between rich and poor countries presents one of the great challenges for climate justice. Armed with their highly educated, healthy and skilled workforces, industrialised countries are already committed to defensive projects, in anticipation of floods, coastal erosion and other consequences of rising temperatures.

Price tags of hundreds of millions of dollars are no disincentive. And invariably the wealthy nation state will backstop the worst case scenarios of loss and damage, either by underwriting uninsurable risks or by providing emergency compensation.

By contrast, urgent plans to construct sea defences in many African coastal cities remain largely on the drawing board.  The risk of disaster is enhanced, with no capacity of national governments to step in with recovery funds if the worst happens. Such climate vulnerability raises the cost of foreign loan finance, arguably an unfair financial burden.

Across the developing world, countries therefore argue that the UNFCCC principles of climate justice should compensate them for loss and damage. Funding suggestions include taxation of polluters such as aviation and shipping. Despite opposition from the richer countries, the Paris Climate Agreement does acknowledge that the topic should at least be considered –  through a structure known as the Warsaw International Loss and Damage Mechanism.

However, the scope of this mechanism is very limited and little real progress has been made. Most discussion has focused on initiatives of NGOs and private financial companies that pioneer innovative forms of climate insurance. But the real challenge for a loss and damage mechanism is how to subsidise risk that becomes uninsurable, as is inevitable.

Coronavirus and climate change are two crises that need humanity

12/3/2020: The virus may lead to a deeper understanding of the ties that bind us all on a global scale. That could help our chances of getting to grips with the climate crisis.

Climate tipping points — too risky to bet against 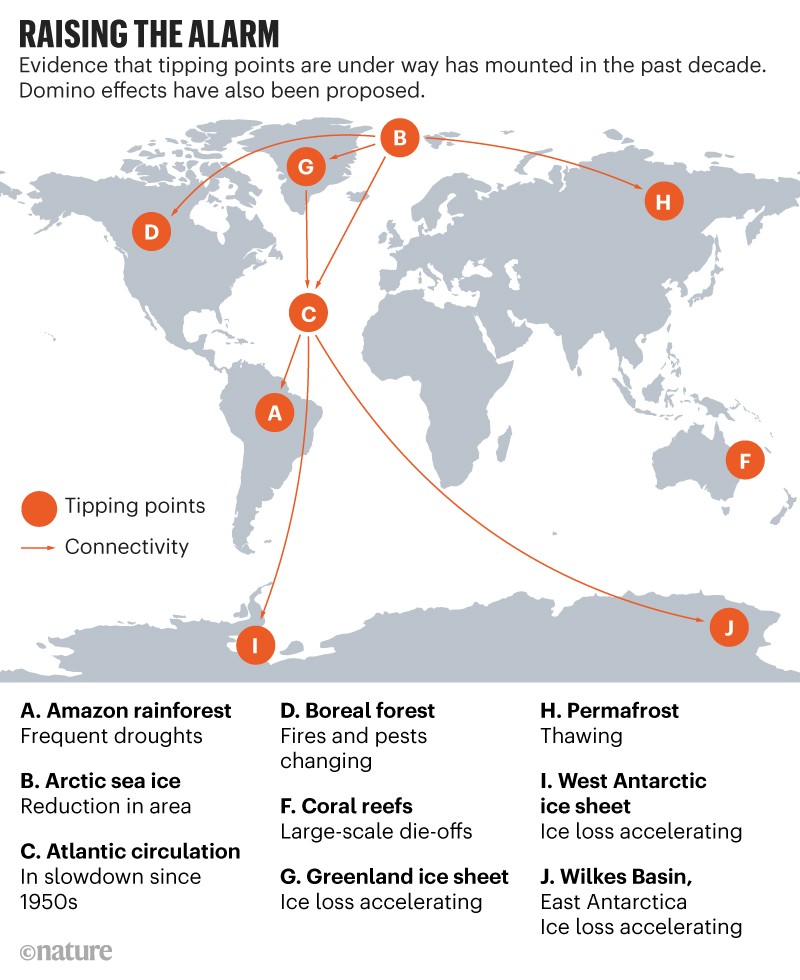 27/11/2019: The growing threat of abrupt and irreversible climate changes must compel political and economic action on emissions. Evidence is mounting that these events could be more likely than was thought and have high impacts.

5/5/2021: Recent commitments to cut emissions by US President Joe Biden and other G7 leaders are welcome but will not stop these countries from overshooting their fair share of the carbon budget. By calling for climate justice, young activists are highlighting that climate change is not only bad but also unfair on poorer countries.

29/4/2021: In an unexpected decision Germany's highest court has ruled that the government's climate legislation is insufficient, lacking detail on emission reduction targets beyond 2030. The case was lodged by youth activists who argued that inadequate emissions plans violated citizens’ fundamental rights.

22/4/2021: Joe Biden has promised to double US international climate finance by 2024 and triple funding for adaptation. The details remain unclear but a US official suggested the baseline was around $2.8 billion, with $500 million of that going on adaptation.

13/4/2021: Under Barack Obama, the US promised $3bn to the Green Climate Fund but had only handed out $1bn before Donald Trump intervened. The Biden administration committed to “make good” on Obama’s promise and campaigners had proposed a figure of $8bn, to catch up with other contributors.


9/3/2021: The World Bank has predicted that climate change will provoke internal migration of 140 million people within developing countries by 2050. This raises particular challenges for the mega-cities of Asia.

26/2/2021: The December 2020 deadline for the 5-yearly update of national plans to meet the goals of the Paris Climate Agreement has passed. The UN reports that fewer than half of all countries have submitted their plans and those that did show inadequate ambition.


24/2/2021: The group of Least Developed Countries has called on the UN Security Council to encourage governments to make binding commitments to climate finance targets at COP26. The 2020 deadline for raising $100 billion per annum is believed to have been missed.


15/2/2021: A majority of young people want their leaders to support low- and middle-income countries that are the most at risk of a warmer planet, according to a new survey of 2,878 people aged 16 to 39.