With projections of supply and demand for freshwater veering off in opposite directions, global warming represents the worst possible intervention.

About two-thirds of the world’s freshwater is frozen in glaciers, snow and ice, self-evidently vulnerable. Rising planetary temperatures will accelerate the pump of the water cycle through faster evaporation from land, rivers, lakes and oceans. A warmer and more volatile atmosphere will receive this added moisture, with uncertain consequences.

The natural cycle for frozen freshwater in mountainous regions involves accumulation during winter and release of meltwater during summer. This seasonal availability of irrigation is vital to farming communities across vast areas, most notably those downstream of the Himalayas, embracing several South Asian countries.

The implications of global warming for rainfall are of equal concern. There is broad agreement that monsoon patterns will change in timing and intensity, that arid and semi-arid regions will become drier, and that extremes of drought and flooding will become more frequent. Rising sea levels will aggravate the problem of groundwater salinity.

Much uncertainty remains, not least in mapping climate predictions on national or regional areas that coincide with the political reach of water management policy. Whilst the effect of climate change on the El Nino and La Nina phenomena is likely to be considerable, the detail remains very difficult to anticipate.

Even where predictions of rainfall trends are confident, there is insufficient understanding of the mechanics of run-off and groundwater recharge to fully grasp the implications. The net impact on crop yields and soil conservation is also uncertain.

Climate change and water scarcity therefore present policymakers with a perfect storm of known and “known unknown” threats. Planning of vital freshwater infrastructure has become fraught with risk, even for the most sophisticated municipal authorities.

Reports already suggest that the impact of global warming will significantly increase the global count of those affected by water scarcity, including the lack of safe drinking water. An example is the Nile Delta, where salinization caused by rising sea level threatens the fertility of a densely populated region.

Nature offers little sympathy to hesitation and uncertainty in response to challenges of water scarcity. Recent droughts in Cape Town and Chennai prompted the concept of  “Day Zero”, the inauspicious moment when household taps would fail, a disconcerting preview of water scarcity in a warming world.

9/12/2019: Rising demand and the climate crisis threaten the entire mountain ecosystem, say scientists. The Indus is the most important and vulnerable “water tower”, as mountain glaciers, snow-packs and lakes are run down by global heating and rising demand.

Egypt and Sudan in talks to defuse tensions over Ethiopian dam

3/12/2019: Nile basin countries fear for their future water supplies as the Grand Renaissance hydroelectric project reaches completion. Analysts fear that Egypt, Sudan and Ethiopia could be drawn into conflict if the dispute is not resolved before the $5bn dam begins operating next year.


4/11/2019: Myths about water, sanitation, and hygiene are preventing investors and donors from allocating adequate resources to services across Africa and South Asia, according to Water & Sanitation for the Urban Poor, a nonprofit organization.

Egypt denounces Ethiopia for moving ahead with Nile dam

9/10/2019: A diplomatic standoff has heightened tension between the countries, which have held on-again-off-again talks over the Grand Ethiopian Renaissance Dam for years. Egypt relies on the Nile for up to 90 per cent of its fresh water.

6/8/2019: The World Resources Institute finds that 17 countries, which are home to a quarter of the world’s population, face “extremely high” water stress. Its updated Aqueduct Water Risk Atlas helps companies, businesses, investors, and governments to identify and evaluate water risks around the world.

17/6/2019: Over two billion people around the world do not have safely-managed drinking water, while 4.2 billion go without safe sanitation services according to the UN's Joint Monitoring Programme report. Source: UN News

Time is running out for the world’s water 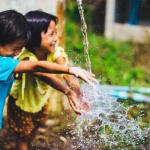 22/3/2019: Demand projections for global freshwater estimate a 50% rise by 2100 – 90% of which will occur in developing countries. Significant financial investment is required if the world is to achieve the SDG for "water for all."